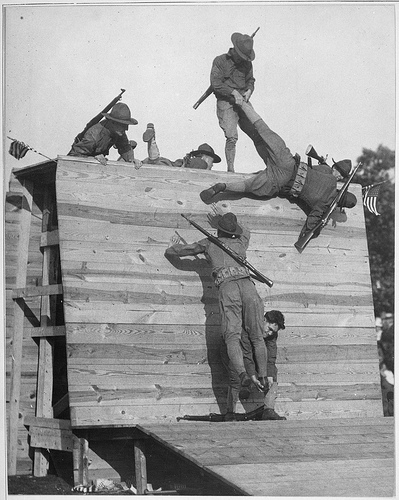 Yesterday we talked about the first piece of creating conflict – character motivation. Today I want to talk about the second piece – obstacles.

Obstacles are anything that gets in the way of the character’s goals. Obstacles come in all shapes and sizes. Think back to your high school English class when you learned about man vs. man, man vs. nature, man vs. self, and all that jazz. Obstacles can be anything!

External obstacles are much easier to get right. You throw an antagonist or a tornado or a ticking time bomb at your protagonist and he scrambles around to try to best it. Internal obstacles, on the other hand, are easy to overlook.

Every main character should have an internal obstacle — something within themselves that stands in the way of achieving what they want. This usually takes the form of an unfortunate character trait, such as being overly fearful, jealous, arrogant, selfish, etc.

This internal obstacle is (usually) not nearly as apparent in the novel as the external obstacles, but creates an extra level of depth. Consider Indiana Jones’ fear of snakes. It doesn’t hold him back in every scene, but it creates exciting and complex tension when it does.

The Beauty of Multiple Obstacles

Stacking obstacles until your character is in a situation that seems impossible to escape is an excellent way to keep readers hooked.

But it is possible for obstacles to be too big:

In a movie, an epic battle between hordes of alligator-people can be super intense, visually striking, and so terrifying you bite your fingernails. But it doesn’t work the same way in novels.

Books aren’t visual, so the more soldiers, bad guys, or monsters you throw into the scene, the harder it is for the reader to relate to or keep track of any individual one. There is also a point where, as humans, we can no longer process the scope of an event on an emotional level because there is no intimacy. If I tell you that a thousand people were murdered, it won’t have near the impact of drawing you into a death scene for a single girl.

Obstacles in books work much the same way. A bad guy blocking each of the exits will often be a much more intense obstacle than a battlefield full of villains. Once you’ve lost the intimacy of an obstacle, tension is reduced.

If huge epic battles are an obstacle in your novel that cannot be removed, make sure to focus tightly on the main characters during the scene. Don’t rely on sweeping descriptions of the antagonists, but focus in on a few key baddies. And don’t forget to describe emotions!

Obstacles Should Increase in Severity

I talked about this a little bit during the First Page Promise lecture: you do not want to put your most intense obstacle at the beginning of the book. The obstacles your character has to face should increase in intensity and severity over time.

If they fight a twenty-foot space alien in chapter one, then a dust bunny monster in chapter thirty, the dusty bunny monster will seem so tiny and insignificant in comparison that the reader will struggle to feel any sense of tension.

The Best Obstacles Challenge the Character

Let’s say your character is deathly afraid of the dark. Use this fear against your character by placing his small child in a pitch black room with a giant monster. Suddenly your character has to face a fear in order to save his child. That’s a lot of complexity and depth for what could be a mediocre scene.

Here’s another example: Your character’s child is being held hostage. The only way to save the child is to shoot the captor, but your character doesn’t believe in murder under any circumstances.

A scene like the ones above will have the reader on the edge of their seat. What’s he going to do? How can he overcome this obstacle despite being scared or against murder? You can practically feel the terror in the character’s heart.

Obstacles that feed off of your character’s darkest issues will be the most captivating.

An Obstacle Should Exist in Every Scene

Note that obstacles do not have to be huge in every scene. They don’t even have to be huge in the novel as a whole. They just need to oppose what the character wants (his motivation), and they need to increase in intensity over time.

The most riveting novels will introduce a new obstacle before or immediately following the elimination of the previous obstacle. You do not want your character wandering around with no obstacles for long periods of time. This can cause the novel to stagnate.

Obstacles are Only Obstacles if the Character Cares

An obstacle must get in the way of a character’s goals. If it doesn’t work against their motivation, or if the character really doesn’t care all that much about it, then it is not a true obstacle.

Obstacles can’t be created by having a character temporarily care about something they ordinarily wouldn’t care about (this goes back to character motivation and how the plot should not dictate it).

If the character has never had an issue with their mother bossing them around and then suddenly (with no explanation/change) views their mother as an obstacle in the way of their independence, their mother will not come across as a legitimate obstacle. The reader will ask, “Who cares? It was never an issue any of the other times!”

For something that was not an obstacle to suddenly become an obstacle, something must first change in the character internally (such as a decision to no longer tolerate their mother’s bossiness).

If you’re struggling to come up with obstacles that truly stand in your character’s way, ask yourself: what is the worst thing that could happen to this character? Chances are you will initially come up with things that are too extreme, but scale it back further and further until you’ve got an obstacle of a reasonable size for the point in the story you’re working on.

This is another big homework assignment that might be too extensive for most participants to accomplish over the course of boot camp. Just get started and do as much as you can.

Go through each scene (not chapter) of your novel, and ask yourself the following:

Now consider your novel as a whole (an outline would be helpful for this but isn’t required):